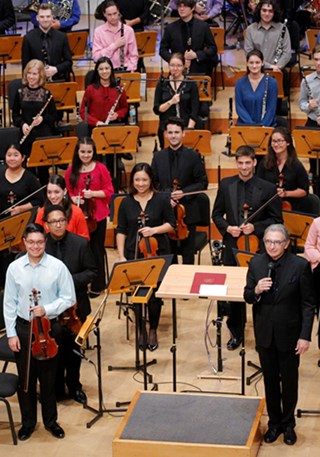 Michael Tilson Thomas is Co-Founder and Artistic Director of the New World Symphony, America’s Orchestral Academy; Music Director of the San Francisco Symphony; and Conductor Laureate of the London Symphony Orchestra. In addition to these posts, he maintains an active presence guest conducting with the major orchestras of Europe and the United States.

Mr. Tilson Thomas began his formal studies at the University of Southern California where he studied piano with John Crown and conducting and composition with Ingolf Dahl. At age 19 he was named Music Director of the Young Musicians Foundation Debut Orchestra. He worked with Stravinsky, Boulez, Stockhausen and Copland on premieres of their compositions at Los Angeles’ Monday Evening Concerts. During this same period he was the pianist and conductor for Gregor Piatigorsky and Jascha Heifetz.

His recorded repertoire of more than 120 discs includes works by composers such as Bach, Beethoven, Mahler, Prokofiev and Stravinsky as well as his pioneering work with the music of Charles Ives, Carl Ruggles, Steve Reich, John Cage, Ingolf Dahl, Morton Feldman, George Gershwin, John McLaughlin and Elvis Costello. He also recorded the complete orchestral works of Gustav Mahler with the San Francisco Symphony.

In 1990 Mr. Tilson Thomas and the New World Symphony were presented in a series of benefit concerts for UNICEF in the United States, featuring Audrey Hepburn as narrator of From the Diary of Anne Frank, composed by Mr. Tilson Thomas and commissioned by UNICEF. This piece has since been translated and performed in many languages worldwide. In August 1995 he led the Pacific Music Festival Orchestra in the premiere of his composition Showa/Shoah, commemorating the 50th anniversary of the bombing of Hiroshima. Thomas Hampson premiered his settings of poetry by Walt Whitman, Renée Fleming premiered his settings of the poetry of Emily Dickinson and the San Francisco Symphony premiered his concerto for contrabassoon entitled Urban Legend. As a Carnegie Hall Perspectives Artist from 2003 to 2005, he had an evening devoted to his own compositions which included Island Music for four marimbas and percussion, Notturno for solo flute and strings and a new setting of poems by Rainer Maria Rilke. Other compositions include Street Song for brass instruments and Agnegram, an overture for orchestra.

Among his many honors and awards, Mr. Tilson Thomas is a Chevalier dans l’ordre des Arts et des Lettres of France, was Musical America’s Musician of the Year and Conductor of the Year, Gramophone Magazine’s Artist of the Year and has been profiled on CBS’s 60 Minutes and ABC’s Nightline. He has won 11 Grammy Awards for his recordings. In 2008 he received the Peabody Award for his radio series for SFS Media, The MTT Files. In 2010 President Obama awarded him the National Medal of Arts, the highest award given to artists by the United States Government.

Jonathan Entenza is a 15-year-old cellist from Miami. He began playing the cello in fourth grade and studies with Wells Cunningham. He grew up in a musical family, including a sister who plays violin and his father who plays piano. Mr. Entenza is currently a freshman at Coral Reef Senior High School and has been selected as Principal Cellist of the Florida All-State Orchestra for three consecutive years. He won third prize in the Alhambra Concerto Competition, has performed annual recitals at the University of Miami and participated in the New World Symphony's 2019 Side-by-Side Concert. This summer, Mr. Entenza will participate in NYO2's summer orchestral training program, where he will perform at the Adrienne Arsht Center and Carnegie Hall. He plans to pursue a career as a soloist. Besides music, he loves playing video-games and basketball.