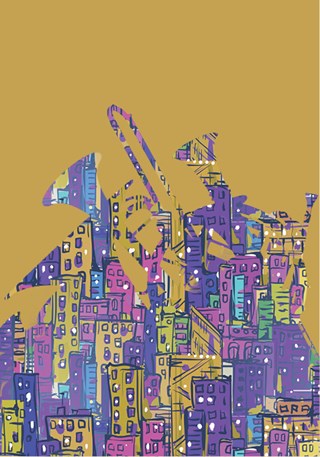 Inside the Music: Echoes of the Harlem Renaissance

THIS EVENT HAS BEEN POSTPONED. Ticketholders, please see announcement email and contact the NWS Box Office if you have any questions.

New World Fellows will present a vibrant multidisciplinary chamber program connecting the Harlem Renaissance’s artistic legacy to today. In tracing the musical roots of contemporary composers, we can follow their lineage not only to 1920s Harlem but also to companion artistic movements across the country. Developed under the guidance of MTT and musicologist Dr. Tammy Kernodle.

This event is part of the New World Symphony’s festival I Dream a World: The Harlem Renaissance and Beyond. This festival is made possible with support from the NWS Collaborations Fund, the NWS Fund for New Ventures and Bank of America.

Inside the Music:
Echoes of the Harlem Renaissance

Inside the Music: Echoes of the Harlem Renaissance is an NWS BLUE Project. Standing for Build, Learn, Understand and Experiment, NWS’s BLUE program is a combination of leadership and entrepreneurship training and hands-on experimentation that provides NWS Fellows with a comprehensive skill set to complement their musical training. NWS BLUE projects are made possible with support from the Maxine and Stuart Frankel Foundation and NWS’s Fund for New Ventures.

Echoes of the Harlem Renaissance is an evening of chamber music that reflects on the lasting impact of the Harlem Renaissance period. The program celebrates works exclusively composed by Black artists within the last 100 years. Influenced by jazz, popular songs and major cultural events, these evocative works take the listener on a
brilliant yet introspective journey by exploring themes of resistance, resilience, tragedy and most importantly joy.

We acknowledge the difficulties and the sadness that is an integral part of Black culture, and we celebrate the tenacity and perseverance of those who dared to resist and exist. It is our aim with this program to acknowledge the layered complexities of the past, while also creating the future. We remember those who have been forgotten,
and we cherish their invaluable legacy.

What happens to a dream deferred?

Or does it explode?

Dr. Tammy L. Kernodle graduated with a bachelor of music degree in choral music education and piano from Virginia State University in Petersburg, Virginia. She received a master of arts and PhD in music history from The Ohio State University. Her scholarship and teaching have been primarily in the areas of African American music (classical and popular), jazz, and gender and popular music. She served as the Scholar in Residence for the Women in Jazz Initiative at the American Jazz Museum in Kansas City (1999-2001) and has worked closely with a number of educational programs including the Kennedy Center’s Mary Lou Williams Women in Jazz Festival, Jazz@Lincoln Center, NPR, Rock ‘n’ Roll Hall of Fame Lecture series and the BBC.

Dr. Kernodle’s work has appeared in American Studies, Musical Quarterly, Black Music Research Journal, The Journal of the Society of American Music, American Music Research Journal, The U.S Catholic Historian, The African American Lectionary Project and numerous anthologies. She is the author of biography Soul on Soul: The Life and Music of Mary Lou Williams and served as Associate Editor of the three-volume Encyclopedia of African American Music. She served as a scholarly consultant for the National Museum of African American History and Culture’s inaugural exhibits entitled “Musical Crossroads” and appears in a number of award-winning documentaries including Mary Lou Williams: The Lady Who Swings the Band and Girls in the Band and recently Miles Davis: Birth of the Cool. In 2014 she received the Effective Educator Award from the Miami University Alumni Association and in 2018 was awarded the Benjamin Harrison Medallion. The Harrison Award is the highest award given to a Miami University faculty member in recognition of their research, teaching and service. She is currently the President of the Society for American Music.

Gabrielle Monachino is a first-year Violin Fellow at the New World Symphony. Originally from Rochester, New York, she completed her undergraduate studies at the Eastman School of Music with Charles Castleman. She completed her graduate work at Carnegie Mellon University, where she served as Assistant Principal Second Violin of the Erie Symphony. In 2019 she was chosen to participate in the Concertmaster Track at the San Francisco Conservatory of Music, where she studied with Alexander Barantschik, Concertmaster of the San Francisco Symphony.

As a soloist, Ms. Monachino has performed in esteemed venues such as the White House, Weill Recital Hall at Carnegie Hall and Dicapo Opera Theatre. She won second prize at the American Fine Arts Festival, and was a semi-finalist in the LISMA International Music Competition. As a teacher, she has held positions at the Eastern Music School and Noel Pointer Foundation, and also maintains a private studio.

Ms. Monachino has collaborated in performance with Sarah Chang, Itzhak Perlman and Walter Seyfarth of the Berlin Philharmonic. Recent performance engagements include recordings with Broadway for Racial Justice and commercial recordings with Jon Batiste.

Ms. Monachino is very grateful for her musical opportunities. Her most impactful teachers and mentors include William van der Sloot, Ian Swensen and Catherin van Hoesen.

A top prizewinner in competitions in the United States and Puerto Rico, Ms. Carella completed her bachelor’s, master’s and professional studies degrees at the Cleveland Institute of Music (CIM) with Jan Sloman and Jaime Laredo. During that time, she served as Concertmaster of the CIM orchestra and was a member of the Advanced Piano Trio Program.

Ms. Carella has performed with the Canton Symphony, Akron Symphony, Cleveland Pops and Firelands Symphony. Additionally, she was a head writer for the Cleveland Institute of Music Admissions blog where she interviewed prominent artists, faculty and covered topics relevant to young musicians. In her spare time Ms. Carella enjoys reading, anything involving being in the sun, spending time with friends and traveling.

First-year Viola Fellow Emilio Carlo is a native of the “Boogie Down” Bronx. Born into a family of musicians, his early childhood musical influences are derived from Salsa, Hip-Hop, R&B and Jazz. He later moved to Prince George’s County, Maryland, where he was first introduced to the viola. He later enrolled in the National Symphony’s Youth Fellowship Program, which played a huge part in his musical development by allowing him play in rehearsals and study with NSO musicians during his high school years.

Mr. Carlo attended the University of Cincinnati College-Conservatory of Music, where he was under the tutelage of Masao Kawasaki and Jan Grüning of the Ariel String Quartet. Mr. Carlo also was part of the inaugural class of the Cincinnati Symphony’s Diversity Fellowship Program from 2016-18.

When not performing, Mr. Carlo spends as much time as he can on hikes and walks with his dog, Ghost. He is extremely excited to explore the city of Miami and reconnect with his Latin heritage and experience all that this amazing city has to offer.

Vivian Chang is a second-year Cello Fellow at the New World Symphony. She has held positions with the New Haven Symphony, Washington Heights Chamber Orchestra and Sullivan County Chamber Orchestra, as well as teaching positions with Nesin Cultural Arts in Monticello, and City Strings and Piano. Formerly based in New York City, she maintained a varied freelance career leading to collaborations with ensembles such as Mimesis Ensemble, RIOULT Dance NY, and the Video Game Orchestra and has performed in venues including Carnegie Hall, Millennium Stage at Kennedy Center, Appel Room at Jazz at Lincoln Center and New York Fashion Week. Most recently, she has been sailing with Holland American Line as a musician for Lincoln Center Stage.

Ms. Chang completed her undergraduate and graduate studies at the Manhattan School of Music, where she worked with Philippe Muller, Julia Lichten and Fred Sherry. She has participated in master classes with Robert DeMaine, Bonnie Hampton, David Geber, Min Cao and Marion Feldman. Outside of the Manhattan School of Music, she has studied and performed at Spoleto Festival U.S.A., Music Academy of the West, Aspen Music Festival and School, Atlantic Music Festival and Colorado College Music Festival.