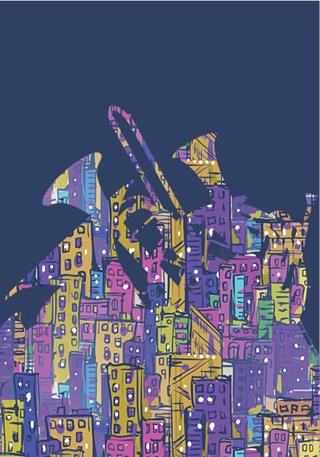 Noir Reverberations: A Night of the Music and Poetry of the Harlem Renaissance and Beyond

Poet Kevin Young (Andrew W. Mellon Director of the Smithsonian’s National Museum of African American History and Culture and Poetry Editor for The New Yorker) and Dr. Tammy Kernodle (Distinguished Professor of Musicology at Miami University of Ohio) explore topics and themes of the Harlem Renaissance through music and poetry, including Young's own. The Ambassador Chorale of Florida Memorial University, a South Florida HBCU, will join the NWS to perform choral settings of works by William Dawson and Moses Hogan as well as traditional gospel songs. Soprano Michelle Bradley will perform art songs by composers, including William Grant Still, Florence Price and Margaret Bonds.

The performances will be preceded by a 60-minute poetry reading by notable Miami-based poets and students, curated by P. Scott Cunningham, Founder of the O, Miami Poetry Festival. O, Miami teaching artists present their own poetry and that of local students. Click here for the event's poems.

This event is part of the New World Symphony’s festival I Dream a World: The Harlem Renaissance and Beyond—a five-day festival that explores and celebrates the history and influence of the Harlem Renaissance and the epicenters of Black excellence that thrived across the nation during the 1920s. This festival is made possible with support from the NWS Collaborations Fund, the NWS Fund for New Ventures and Bank of America. For a full list of festival events, click here.

Noir Reverberations:
A Night of Music and Poetry of the Harlem Renaissance and Beyond

Dr. Tammy L. Kernodle graduated with a bachelor of music degree in choral music education and piano from Virginia State University in Petersburg, Virginia. She received a master of arts and PhD in music history from The Ohio State University. Her scholarship and teaching have been primarily in the areas of African American music (classical and popular), jazz, and gender and popular music. She served as the Scholar in Residence for the Women in Jazz Initiative at the American Jazz Museum in Kansas City (1999-2001) and has worked closely with a number of educational programs including the Kennedy Center’s Mary Lou Williams Women in Jazz Festival, Jazz@Lincoln Center, NPR, Rock ‘n’ Roll Hall of Fame Lecture series and the BBC.

Dr. Kernodle’s work has appeared in American Studies, Musical Quarterly, Black Music Research Journal, The Journal of the Society of American Music, American Music Research Journal, The U.S Catholic Historian, The African American Lectionary Project and numerous anthologies. She is the author of biography Soul on Soul: The Life and Music of Mary Lou Williams and served as Associate Editor of the three-volume Encyclopedia of African American Music.  She served as a scholarly consultant for the National Museum of African American History and Culture’s inaugural exhibits entitled “Musical Crossroads” and appears in a number of award-winning documentaries including Mary Lou Williams: The Lady Who Swings the Band and Girls in the Band and recently Miles Davis: Birth of the Cool. In 2014 she received the Effective Educator Award from the Miami University Alumni Association and in 2018 was awarded the Benjamin Harrison Medallion. The Harrison Award is the highest award given to a Miami University faculty member in recognition of their research, teaching and service. She is currently the President of the Society for American Music.

Mr. Young is the author of 13 books of poetry and prose, including Brown (Knopf, 2018), as featured on the Daily Show with Trevor Noah; Blue Laws: Selected & Uncollected Poems 1995-2015 (Knopf, 2016), longlisted for the National Book Award; and Book of Hours (Knopf, 2014), a finalist for the Kingsley Tufts Poetry Award and winner of the Lenore Marshall Prize for Poetry from the Academy of American Poets. His collection Jelly Roll: a blues (Knopf, 2003) was a finalist for both the National Book Award and the Los Angeles Times Book Prize. His newest book of poetry, described as “A book of loss, looking back and what binds us to life, by a towering poetic talent,” is Stones (Knopf, Sept. 21, 2021). He is also working on a children’s book titled Emile and the Field (RHCB/Make Me a World, March 15, 2022), illustrated by Chioma Ebinama.

Mr. Young is the editor of nine other collections, including The Collected Poems of Lucille Clifton, 1965- 2010 (BOA Editions, 2012) and The Hungry Ear: Poems of Food and Drink (Bloomsbury, 2012). He is the editor of the anthology African American Poetry 1770–2020: 250 Years of Struggle & Song (Library of America, 2020). He is series editor and wrote the introduction and forward for Unsung: Unheralded Narratives of American Slavery & Abolition.

Michelle Bradley, a graduate of the Lindemann Young Artist Development Program, is beginning to garner great acclaim as one of today’s most promising Verdi sopranos.

This season Ms. Bradley makes her debut with the Lyric Opera of Chicago as the title role in Tosca and returns to the Metropolitan Opera as Liù in Turandot.  In concert, she will debut with the San Francisco Symphony as the soprano soloist in Beethoven’s Symphony No. 9 and with the Atlanta Symphony as the title-role in Act 3 of Aida.  She will also be heard in a pair of solo recitals for the San Diego Opera with Brian Zeger at the piano. Future projects include a debut with then San Francisco Opera and returns to The Metropolitan Opera and Lyric Opera of Chicago, all in leading roles.

Last season, Ms. Bradley made debuts with the Prague State Opera as the title role in Aida and in recital with the Houston Grand Opera and Philadelphia Chamber Music Society. She also appeared in concert with the Dallas Symphony in a program of gospel and in a gala concert with the San Diego Opera.

Previously Ms. Bradley made debuts with the Vienna State Opera as Leonora in Il trovatore (a role debut), San Diego Opera as the title-role in Aida and returned to The Metropolitan Opera for their New Year’s Eve Gala as Liù in Act II of Turandot.  She appeared in solo recital at the Kennedy Center and performed Barber’s Knoxville, Summer of 1915 with the New World Symphony.

Ms. Bradley is the 2017 recipient of the Leonie Rysanek Award from the George London Foundation, the 2016 recipient of the Hildegard Behrens Foundation Award, and a first-place winner in the Gerda Lissner and the Serge and Olga Koussevitzky vocal competitions. She is the 2014 grand prize winner of the Music Academy of the West’s Marilyn Horne Song Competition.

The Ambassador Chorale of Florida Memorial University was founded by the late Professor Roosevelt Williams during the 1975-76 academic year with four eager members to officially represent the University as its public relations entity.

Today, under the direction of Dr. Argarita Johnson-Palavicini (“Dr. J”), the Chorale has upwards of 50 members that not only perform as an independent academic ensemble, but enjoy exposure to sight-reading, vocal technique, and performance pedagogy.

Members of the Chorale also hold leadership responsibility for the organization through appointed administrative positions.

The Chorale performs a wide range of music, and experiments with various musical genres as well as student compositions. The Chorale has performed in the United States and Europe to great acclaim.