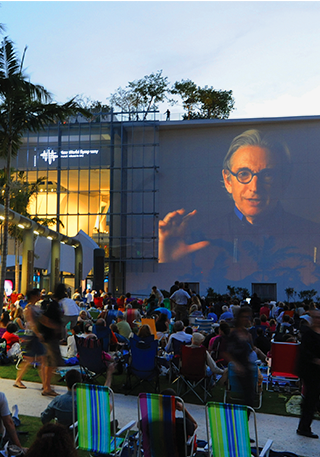 Conductor William Eddins takes the New World Symphony podium to lead a two-night celebration of works influenced by the art and artists of the Jazz Age. These concerts will be hosted by Festival curator, Dr. Tammy Kernodle. NWS will be joined by soprano Louise Toppin in works by Samuel Coleridge-Taylor, James P. Johnson, Scott Joplin and Maurice Ravel.

This event is part of NWS's I Dream a World: The Harlem Renaissance in Europe festival. Click here for a full listing of festival events.

William Eddins is the Music Director Emeritus of the Edmonton Symphony and a frequent guest conductor of major orchestras throughout the world. His engagements have included the New York Philharmonic, St. Louis Symphony, Philadelphia Orchestra and the symphony orchestras of San Francisco, Boston, Minnesota, Cincinnati, Atlanta, Detroit, Dallas, Baltimore, Indianapolis, Milwaukee, Houston, as well as the Los Angeles and Buffalo philharmonics.

Mr. Eddins’ career highlights include taking the Edmonton Symphony Orchestras to Carnegie Hall in 2012, conducting RAI Orchestra Sinfonica Nazionale on Italian television and leading the Natal Philharmonic on tour in South Africa with soprano Renée Fleming. Equally at home with opera, he conducted a full production of Porgy and Bess with Opera de Lyon both in France and the Edinburgh Festival and a revival of the production during the summer of 2010.

Mr. Eddins is an accomplished pianist and chamber musician. He regularly conducts from the piano in works by Mozart, Beethoven, Gershwin and Ravel. He has released a compact disc recording on his own label that includes Beethoven’s Hammer-Klavier Sonata and William Albright’s The Nightmare Fantasy Rag.

A native of Buffalo, Mr. Eddins attended the Eastman School of Music, studying with David Effron and graduating at age 18. He also studied conducting with Daniel Lewis at the University of Southern California and was a founding Fellow of the New World Symphony.

Dr. Tammy L. Kernodle is University Distinguished Professor in the Department of Music at Miami University (Ohio), who specializes in African American music (concert and popular) and gender studies in music.

Her scholarship explores the intersection of gender and racial identity, performance practice and musical genre. Her work has appeared in major peer-reviewed journals including American Studies, Musical Quarterly, Black Music Research Journal, The Journal of the Society of American Music (JSAM), American Music Research Journal, The U.S Catholic Historian, and the Journal of the American Musicological Society (JAMS). She also was a contributor to The African American Lectionary Project, the Smithsonian Anthology of Hip Hop and Rap and the Carnegie Hall Digital Timeline of African American Music. Her scholarship also appears in numerous anthologies and reference works including Women’s Voices Across Musical Worlds, John Coltrane and Black America’s Quest for Freedom: Spirituality and the Music, and The Cambridge Companion to Women in Music Since 1900.

Kernodle served as the Scholar in Residence for the Women in Jazz Initiative at the American Jazz Museum in Kansas City from 1999 until 2001. She has worked closely with a number of educational programs including the Kennedy Center’s Mary Lou Williams Women in Jazz Festival, Jazz@Lincoln Center, NPR, Canadian Public Radio, the Rock ‘n’ Roll Hall of Fame, and the BBC.

From 2012-2016, Kernodle served as a scholarly consultant for the exhibits entitled “Musical Crossroads” at the National Museum of African American History and Culture. She appears in a number of award-winning documentaries including Mary Lou Williams: The Lady Who Swings the Band, Girls in the Band, Miles Davis: Birth of the Cool, and How It Feels to Be Free.

In 2014, she received the Effective Educator Award from the Miami University Alumni Association and in 2018 was awarded the Benjamin Harrison Medallion. The Harrison Award is the highest award given to a Miami University faculty member in recognition of their research, teaching and service.  She is the immediate Past President of the Society for American Music.

Represented by Joanne Rile Artist Management, she toured in "Gershwin on Broadway" with pianist Leon Bates and currently tours with Joseph Joubert, piano and Robert Sims, baritone.   She has recorded more than nineteen compact disks of primarily American Music songs with piano and with orchestra including solo CDs Songs of Illumination, (Centaur Records), and on Albany Records Ah love, but a day (with John O’Brien) He’ll Bring it to Pass, (Joseph Joubert, piano), Heart on the Wall with the Prague Radio Symphony and La Saison des fleurs with John Obrien.  Her newest release is Vol. I Songs of Love and Justice is the songs for soprano by Adolphus Hailstork with John O’Brien at the piano.  Due for release in 2023 are Summer.Life. Songs (songs by Adolphus Hailstork, Vol. 2); Duos (with countertenor Darryl Taylor; vocal chamber music) and The Soprano songs of T. J. Anderson.

She edited and published 8 anthologies and collections of songs by African American composers with Classical Vocal Reprints in 2020-2021 including An Anthology of African and African Diaspora Songs, Rediscovering Margaret Bonds: Spiritual Suite for piano and Bonds Songs, five volumes of Songs by Adolphus Hailstork and an edition of Margaret Bonds's choral work “St. Francis’ Prayer” for SATB with Hildegard Press in March 2021. She is currently collaborating on several other anthology and collection projects including new anthologies of Harry Burleigh, Undine Smith Moore and Margaret Bonds songs.

Her most recent performances include co-curating and hosting the Minnesota Orchestra concert of all African Diaspora compositions (10/6/22), co-curating and singing a festival in May 2021 of four concerts on Black Music in Hamburg, Germany with Thomas Hampson with Larry Brownlee, and Leah Hawkins, and in October 2021 appearing as soloist with the renowned Experiential Orchestra in New York City conducted by James Blachly, conductor, and a recital of the songs of Harry Burleigh on the Oxford Lieder Festival in Oxford, England.  The Oxford appearance marked the first appearance of African American Art Song on this prestigious festival.   Other performances include the 150th celebration of the ratification of the 13th amendment for Congress and President Obama at the U.S. Capitol; a performance in Havana, Cuba with the women’s orchestra Camerata Romeu and the opening of the Smithsonian’s African American Heritage Museum.  She currently tours in the “New Generation Project” with soprano Marquita Lister.  This project is a multi-cultural response to African American poetry.

Since 2010, she has been on the summer faculties of the Baltimore Summer Opera Workshop (Baltimore, MD), the Vocal Course for The National Conservatory (Bogota, Colombia), the Amalfi Coast Music Festival (Maiori, Italy), and the Accra Symphony Operatic Course (Accra, Ghana).

Toppin studied with George Shirley, Phyllis Bryn Julson, Reri Grist, and was a fellow at the Britten Aldeburgh Festival studying with Joan Sutherland, Richard Bonynge, and Elly Ameling.  She also coached with Sylvia Olden Lee and Charlotte Holloman on a regular basis.

Toppin was the recipient of many teaching awards, including the North Carolina Board of Governor’s Excellence in Teaching Award (the state’s highest award). She is also a recipient of the National Opera Association Legacy Award and the African American Art Song Achievement Award.

She served on several boards including the appointments by four North Carolina Governors to the North Carolina Arts Council, NCAC Executive Board, and the African American Heritage Commission.  In addition to serving on the education committee for the Denyce Graves Foundation, she is on the boards of Opera Ebony and The Hampsong Foundation.  She is the co-founder and Director of the George Shirley Vocal Competition and Videmus (promoting African American music). She is also the founder/editor of the Africandiasporamusicproject.org that is a research tool to locate the repertoire of composers of the African Diaspora from the 1600s to the present.