From the Archives: NWS and MTT at Carnegie Hall 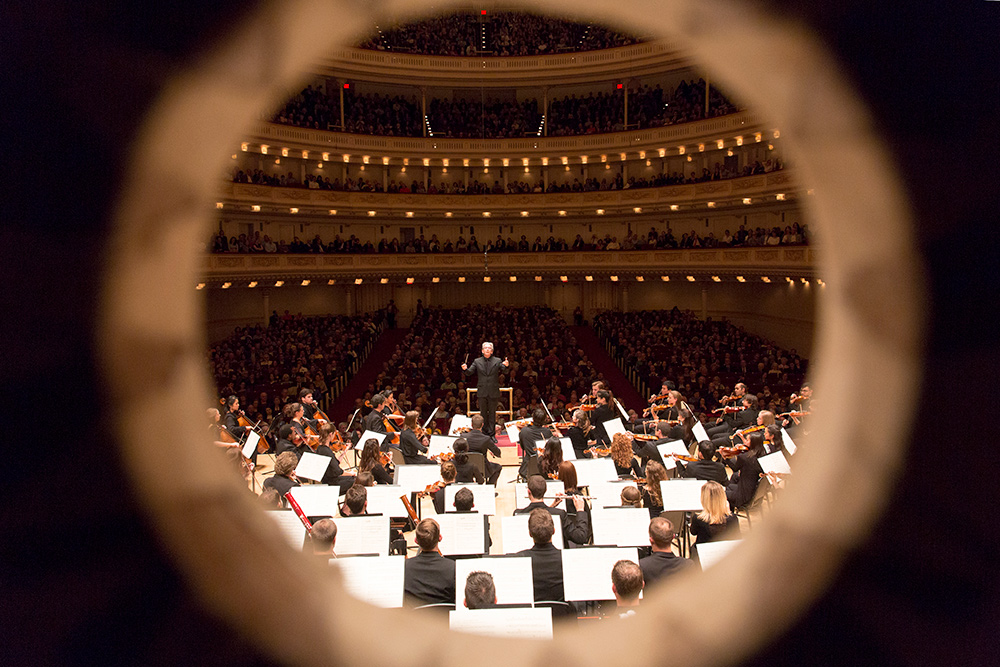 Following its Season Finale performances on April 26 and 27, the New World Symphony will travel to New York City for two performances at Carnegie Hall on May 1 (Stern Auditorium) and May 2 (Zankel Hall). NWS’s return to arguably the nation’s most famous home for classical music will serve as a benchmark in the blossoming careers of its talented young musicians and will reaffirm the organization as a cultural ambassador and its mission to honor the past and shape the future of classical music.

Helping Fellows mark this defining milestone are 16 NWS alumni from top orchestras across the U.S., including The Philadelphia Orchestra, Los Angeles Philharmonic and Cleveland Orchestra, who will join the Fellows on stage for the two performances.

The upcoming performances also commemorate the finale of NWS Co-Founder and Artistic Director Michael Tilson Thomas’ season-long Perspectives series, in which he has appeared at Carnegie Hall with the San Francisco Symphony, Vienna Philharmonic, National Youth Orchestra and, now, New World Symphony. This is MTT’s second time to be selected by Carnegie Hall as a Perspectives artist, an honor bestowed on acclaimed artists, inviting them to explore their own musical individuality and create their own personal concert series through collaborations with other musicians and ensembles.

As we look forward to the tour, here’s how NWS's friends and family in South Florida can join the excitement in person and online:

NWS is performing two preview concerts of its upcoming Carnegie Hall performances at the New World Center:
Saturday, April 20 at 2:00 PM : MTT’s Playthings of the Wind
Friday, April 26 at 7:30 PM and Saturday, April 27 at 8:00 PM: Season Finale with MTT and Yuja Wang

NWS’s May 1 performance at Carnegie Hall will be webcast live on medici.tv and available for free replay for three months.

The May 2019 performances mark NWS’s fifth visit to Carnegie Hall over the last 20 years. It was the first Florida orchestra to perform in the historic cultural landmark when NWS made its Carnegie Hall debut in 1989. Before the performance, former NWS Executive Director Jeffrey Babcock said, “Playing at Carnegie Hall makes a statement about the level of the orchestra and the confidence we have in it. It’s also the kind of experience every musician looks toward as a milestone in their career.” 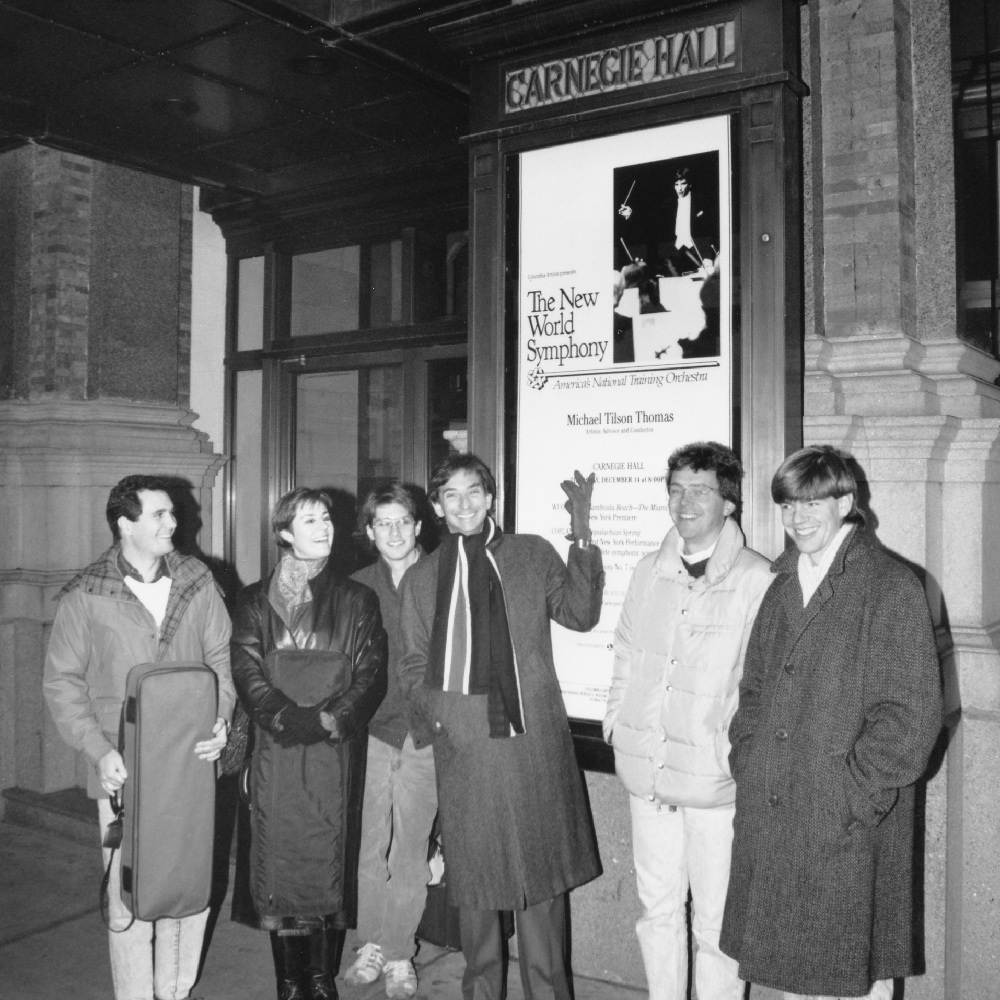 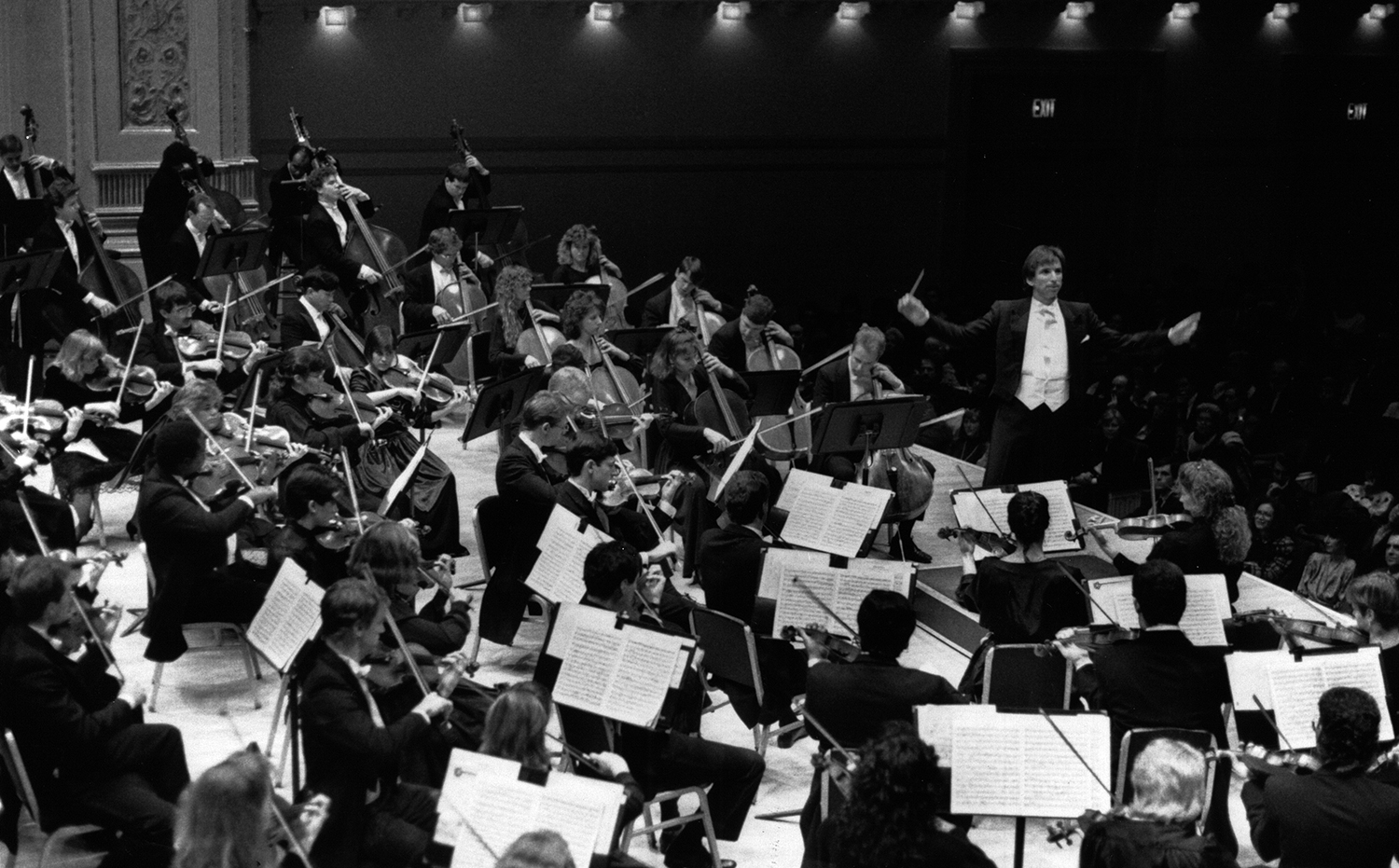 “The New World Symphony is a first-rate ensemble that’s superseded only by America’s ‘top 10’ [orchestras]. Tilson Thomas, of course, knows no superior among conductors of his generation, and therefore it was a foregone conclusion that the performance would be outstanding in every way.”
-- Bill Zakariasen, N.Y. Daily News

“The [debut performance] was…good enough to give hope for the future – both for musical life in Miami and for this ensemble’s function as a conduit for other orchestras.”
-- John Rockwell, The New York Times 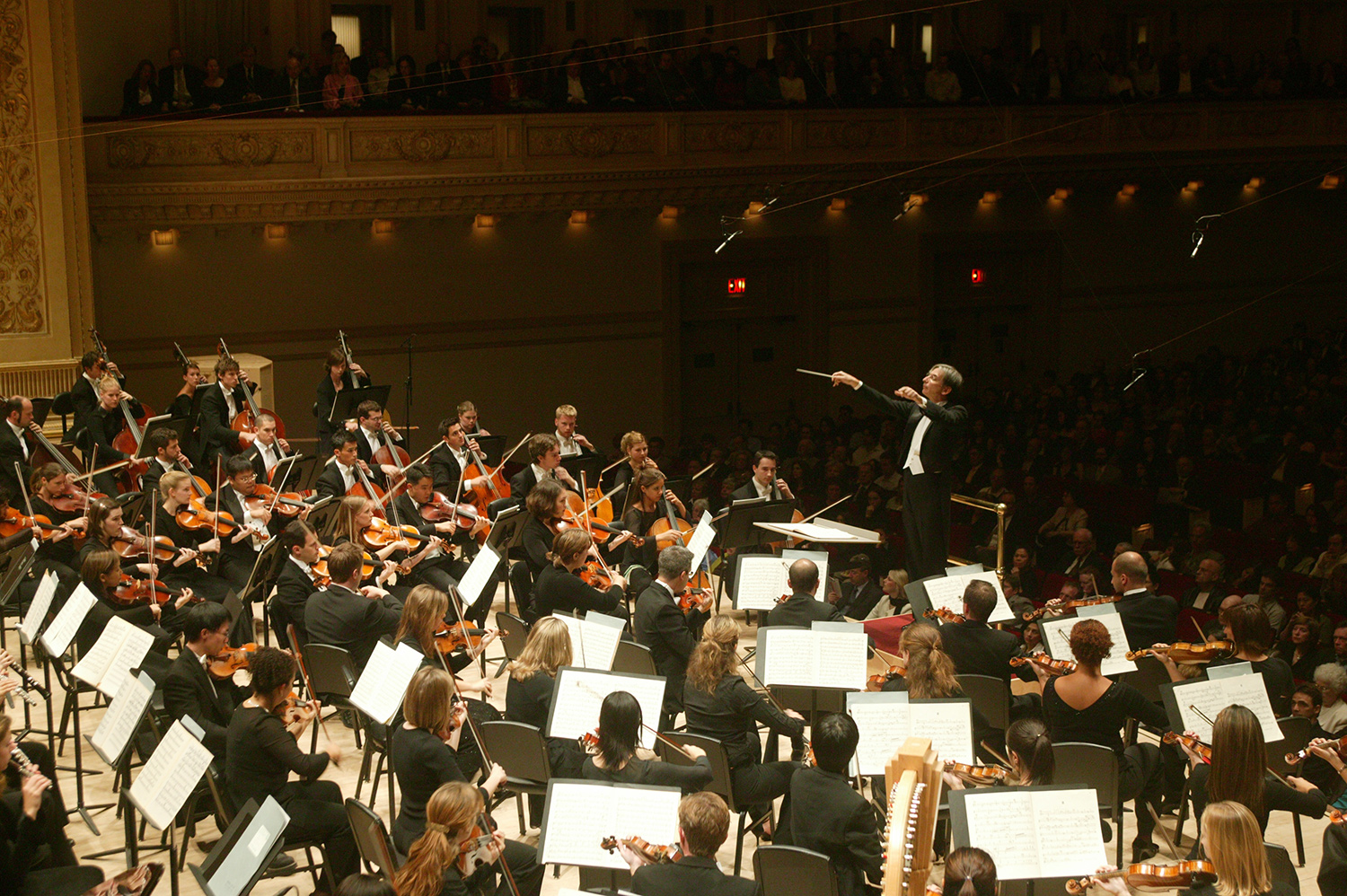 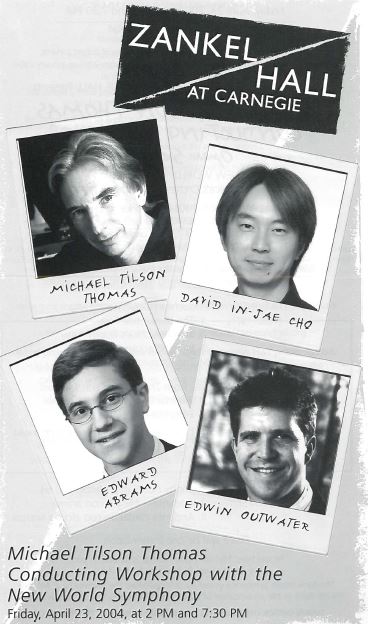 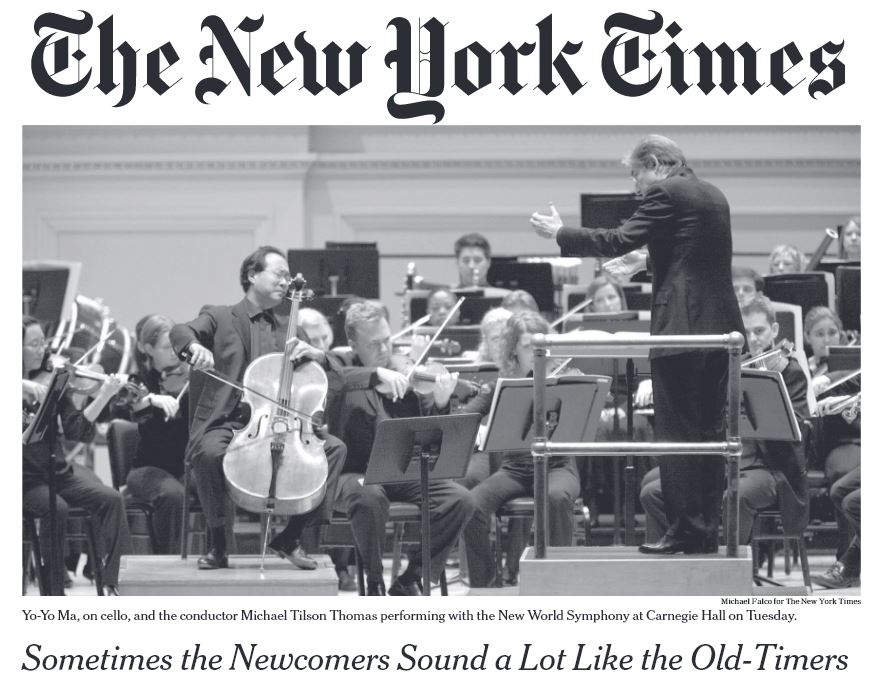 “The orchestra’s performance here showed what can be accomplished expediently when ambitious, unjaded and highly gifted young musicians work with a dynamic conductor who is also a born teacher.”
-- Anthony Tommasini, The New York Times

NWS toured to Carnegie Hall and the John F. Kennedy Center for the Performing Arts with violinist Anne-Sophie Mutter, that season’s Carnegie Hall Perspectives artist. Ms. Mutter, in “an inspiring statement, as well as a smart artistic choice” chose to conclude her series with MTT and NWS in a program that included the U.S. premiere of Norbert Moret’s En Rêve, Berg’s Violin Concerto, Debussy’s La Mer and Schubert’s Incidental Music to Rosamunde. 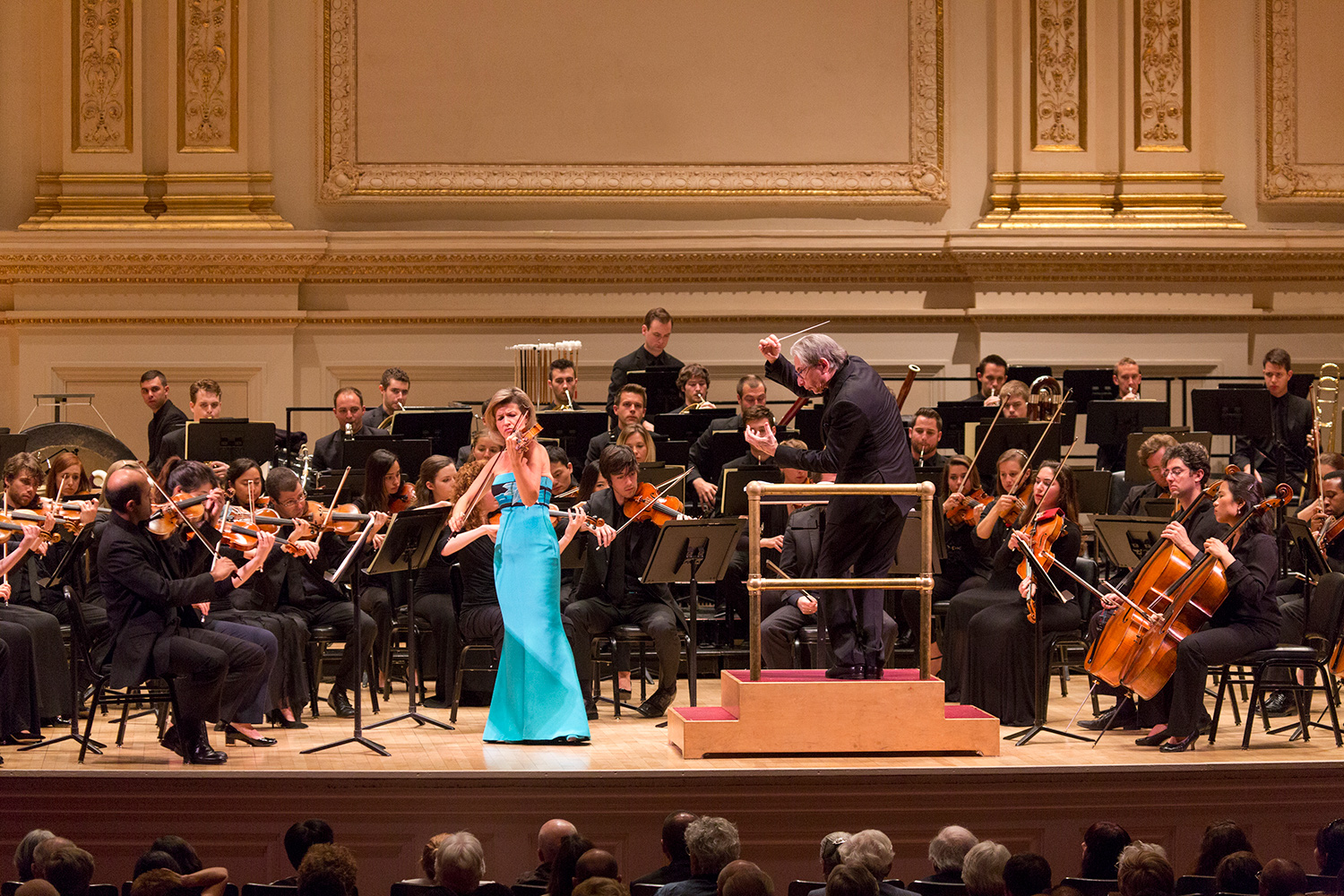 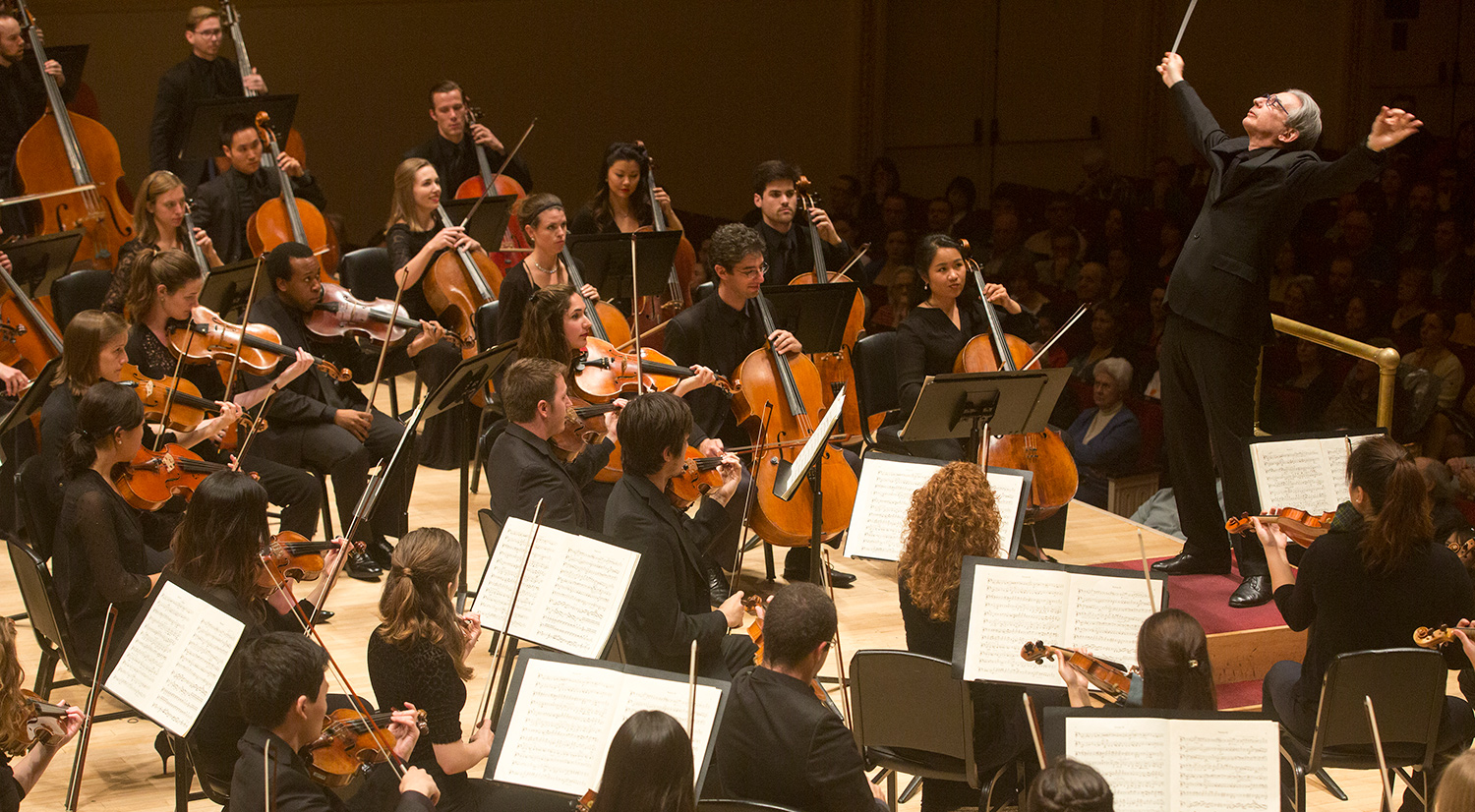 “No orchestra in Carnegie Hall over the past few years has sounded better than this one, and few have sounded as good.”
-- George Grella, New York Classical Review

While on the legendary stages of Carnegie Hall’s Stern Auditorium and Zankel Hall, NWS Fellows will remain cool under the spotlight thanks to a partnership with Coregami, a new technical formal wear company for performing artists. Coregami was founded in 2015 by Kevin Yu, a violinist once frustrated by uncomfortable formalwear options musicians wore to perform. “I was playing Berlioz’ Symphonie fantastique and had drenched my tuxedo while on stage. I saw a problem and was determined to find a solution.” Kevin studied the advancing technology of fabric design and the rising popularity of athleisure wear to create the world’s first moisture-wicking tuxedo shirt. “Once you go comfortable, it’s hard to go back to uncomfortable.” Currently used in every major symphony orchestra in the United States, Coregami now offers five different shirt options—what Kevin calls “solutions”—all named after inspiring musicians.

On May 1 and 2, NWS’s male Fellows will wear Coregami’s The Coltrane – a sleek all-black dress shirt made from four-way stretching, moisture-wicking fabric. 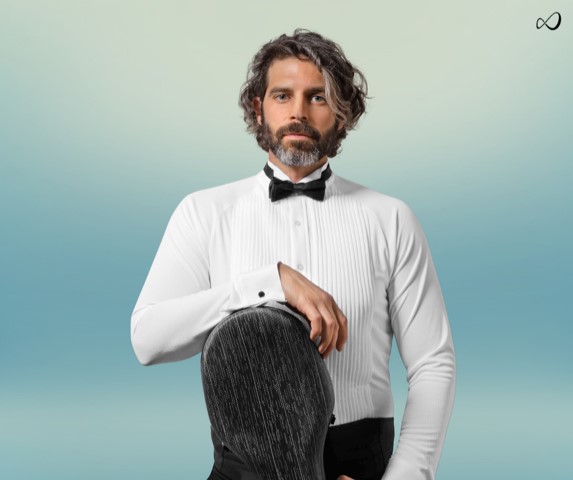 “I am drawn to the New World Symphony,” says Kevin. “As the most elite musical incubator in the world, NWS is the best fit for a Coregami partnership. The Fellows are amazingly gifted and understand the importance of functionality on stage. They understand that anything is possible and are used to experimenting. Coregami is similar in that it’s not afraid to fail its way to a solution. We want to help foster NWS’s mission of educating and nurturing the next generation. Most importantly, we want Fellows to join the design process and dream of new solutions.”