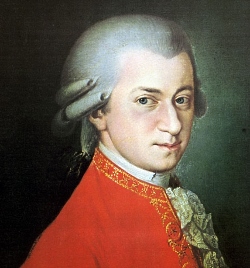 The New World Sym­phony first per­form­ed works by Mozart mere weeks after begin­ning its very first sea­son. On Feb­ru­ary 28, 1988, in a “run-out” concert for the Chopin Foun­da­tion gala, NWS Fel­lows per­formed the over­ture to Mozart’s opera The Marriage of Figaro. A few days later, NWS held an open rehearsal at Miami-Dade Com­mu­nity Col­lege, per­form­ing the Sym­phony No. 29, and then per­formed it at the con­cert of March 4 at the Gusman Center, under the baton of Neal Stulberg.

The New World Symphony has performed the music of Mozart in every season of its existence, with dozens and dozens of his works in the repertoire. And over the years NWS has featured those works in many festivals and concerts devoted to his musical oeuvre.

In a description of one of those festivals, the NWS newsletter of the time said “In his short life of only 35 years, Wolfgang Amadeus Mozart left a musical legacy the world will treasure for centuries to come.” 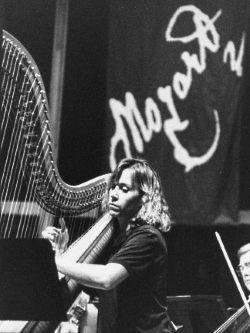 The first NWS Mozart Festival was held in April 1989, in the second season. Another Mozart Festival in October 1991 commemorated the 200th anniversary of his death. October 1994 saw a joint Mozart and Mendelssohn Festival, and the Mozart In-Context™ Festival took place in November 1998. In January 2006 NWS held another Mozart In-Context™ Festival to celebrate the 250th anniversary of his birth.

Mozart-specific concerts have included “Mozart and the Height of Classicism” in December 2003; “Mozart on Jupiter,” the Concert for Kids in March 2005; “Mozart Cubed” in November 2009; and the “It’s a Family Affair” concert of February 2011.

The next opportunity to hear a piece by Mozart at the New World Symphony is the Inside the Music concert on Tuesday, February 7 – the "Kegelstatt" Trio in E-flat major for Piano, Clarinet and Viola, K.498.

Posted in: Composers, From The Archives