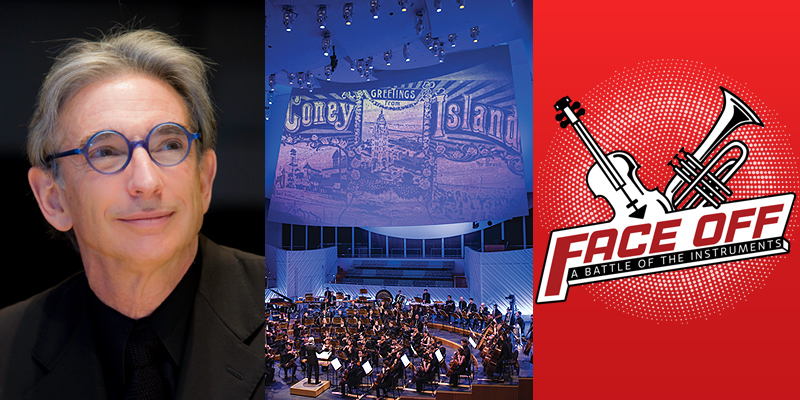 New World Symphony will herald the start of 2021 with virtual events that include the return of Face Off—the beloved, Fellow-designed battle royale of the instruments—and two full-orchestra Encore Concerts. January also marks the Fellows’ return to Miami Beach in anticipation of events, concerts and fellowship activities taking place February through May, which will be announced in early 2021.

Face Off: A Battle of the Instruments

Let’s get ready to rumble! Face Off: A Battle of the Instruments returns with a new format, new voting app and a new version for kids! NWS Fellows will still be duking it out and vying for your votes, but this time in an online arena. Attendees will choose this year’s winner live via a new web-based app designed by Clarinet Fellow Angelo Quail. Face Off’s concert and voting app will be offered in both English and Spanish.

Due to the live nature of the competition, both Face Off concerts will stream live and are not available for on-demand streaming after the concert starts. Current NWS subscribers at all three package levels may RSVP for this virtual concert by contacting the Box Office at tickets@nws.edu or 305.673.3331.

Face Off is designed by Horn Fellows Corbin Castro and Eli Pandolfi and Clarinet Fellow Angelo Quail. Fellow-driven projects are sponsored in part by the Maxine and Stuart Frankel Foundation. Knight Foundation and New World Symphony: Reimagining Classical Music in the Digital Age.

NWS will host two virtual Encore Concerts in January that will feature NWS Fellows past and present on stage at the New World Center with Michael Tilson Thomas. The concerts consist of performance highlights from past seasons and showcase many of NWS’s world-renowned guest artists and conductors. NWS Encore concerts will be available for on-demand streaming for 72 hours. Current NWS subscribers at all three package levels may RSVP for this virtual concert by contacting the Box Office at tickets@nws.edu or 305.673.3331.

NWS will host several free events online in January, including its monthly yoga series in partnership with Jackson Health System, a Virtual Hangout with Fellows to discuss equity in classical music, and fellow-designed presentations.

January 25: Solo Spotlight
Live on MUSIAC, Oboe Fellow Victoria Chung presents a multimedia recital on the life of a musician before and during the pandemic