NWS Alumnus Reacts to His Feature in Nationwide GMC Commercial

While you are watching the Olympics, the nightly news, or your favorite primetime show you may have seen the above national TV spot for GMC's 2017 Acadia, but what you may not have realized is the Maestro featured is a former New World Symphony Fellow.

Kazem Abdullah fell in love with music at a young age and began playing the clarinet at 10 years old. He graduated from the Cincinnati Conservatory of Music, with a Bachelor of Music in Clarinet. He then studied at the University of Southern California before winning a spot as a Clarinet Fellow at The New World Symphony, working under Artistic Director Michael Tilson Thomas for two seasons. Abdullah says it was during a conversation with MTT that he realized, if he was going to pursue his dream of becoming a conductor, he needed to give it everything he had, which is when his focus shifted from clarinet to conductor.

The Indiana native is now more than 4,000 miles from home serving as the Generalmusikdirektor of the city of Aachen, Germany since 2012, and has led orchestras all over the world.

New World Symphony caught up with Abdullah to learn more about his life today and how he ended up on TV screens across the nation. 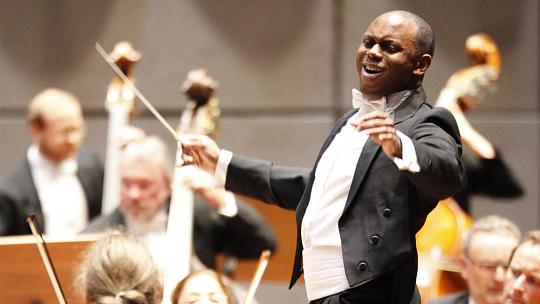 You were a Clarinet Fellow at the New World Symphony, how did you end up becoming a conductor?

Some of my first important conducting experiences were during my two years as a Fellow at the New World Symphony. Although I was a Clarinet Fellow and my main responsibility was to play in the orchestra, I discovered a passion for conducting while working with the orchestra and was lucky enough to have supportive colleagues who encouraged my desire to do more conducting and to begin laying the foundation for what would become my formal training to become a Maestro.

I have of course been busy with the music director duties in my position in Aachen, Germany. In January, I conducted my first Wagner opera "Tannhäuser". It was a production by the Italian director Mario Corradi and was a huge success both critically and at the box office. In March, I did an opera gala concert in Aalborg, Denmark with the world renowned soprano Angela Gheorgiu. She is such a wonderful singer, musician, artist and most importantly a very warm hearted person! In April, I conducted the Halle Staatskapelle in Halle, Germany in a very interesting French program which included Dutilluex's Symphony No. 2.  I also conducted Mozart's Die Entführung aus dem Serail in Aachen and ended my season there in May with a monumental performance of Mahler's Sixth Symphony. In June, I conducted the the Westchester Symphony in New York and then in July conducted at the Stellenbosch Chamber Music Festival in South Africa. In addition to me, there were two more New World Symphony alumni on the faculty, Billy Hunter (trumpet) and Rob Knopper (percussion).

Tell us about this GMC commercial which you are prominently featured in, how did that come about?

I was just very lucky! Some people from an advertising agency that had the concept for the commercial saw me in concert and after seeing my website and history thought that I should be the conductor of the orchestra. They really wanted to have a real conductor in the commercial and felt that I had the look and feel, gravitas and sellability that they wanted to make this commercial fly!

What was it like being the focus of a national commercial for such a huge brand? What was the overall experience like?

It was a lot like making music with an orchestra or rehearsing for an opera.  The commercial was filmed over the course of one day. The process of filming it was almost like practicing in that you have a whole team of people focused on getting every possible angle and image as perfectly as possible. The attention to detail from everyone was amazing!

Why did you decide to team up with this brand? Why do you think they wanted to partner with you?

I think anytime classical music can be used to represent a brand is a good thing. When the advertising executives told me about their concept, precision in an orchestra versus precision in the GMC Acadia, I thought this was a great comparison to make. I think it is a connection an everyday person might now think about when they think about the role of conductor and become more interested in seeing a conductor in action by attending a concert, as well as drawing parallels between what they experience during that concert and what they do in their daily life and with the GMC Acadia.

GMC says precision, attention to detail, confidence, and inspiring are the qualities you, as a maestro of a world-class orchestra, share with every GMC they make, specifically the new 2017 Acadia. How do you feel about the comparison?

It is extraordinarily flattering. I have devoted my entire life to becoming the best musician and conductor I can be and it was wonderful to have that recognized and acknowledged in such a public way. The 2017 Acadia is a phenomenal vehicle and it too set itself almost impossible goals of perfection that I can relate to in my own musical life. We both strive to change the world in the ways that we can, me through music and the Acadia through a very differentiated driving experience, both of which are designed to change lives and to elevate their expectations about what to expect from classical music and everyday driving.

What are the most important qualities that you think a conductor should have?

I think a conductor needs to be informed first and foremost. He must know his repertoire inside out. He must always be extremely prepared and he must demand that of his players as well. He also needs to be very sensitive. He needs to be sensitive to the notes on the paper so he can draw out and tease out for himself what the composer intended to convey with his specific compositions. He must also be sensitive to the needs and desires of his orchestra so that their points of view are always heard and incorporated into the music making. He must always have a vision, a vision for his orchestra and a vision for the music it plays. He steers this great big ship of music making and needs to know where he wants this vessel to go. It is a multifaceted role that requires several highly rare, but necessary skills all rolled up in one person.

Having worked with Michael Tilson Thomas at the New World Symphony, how did he help prepare you for your career as a conductor and not only the national, but international attention that comes with your success?

I believe that Michael truly led by example. I had the opportunity to work with him and to be taught by him, but most importantly I got to see the magic that happens when he sets foot on that podium. It is a transformation from teacher to Maestro to Commander-in-Chief of so many musicians, which gave me a wonderful example of what I wanted to become. Of course, I needed to find my own way to be similarly distinctive and to play to my unique strengths. What he taught me, though, was that I had an extraordinary gift and that I should harness it for the benefit of the music making, figuring out along the way what made me special as a conductor and capitalizing on that for all the conducting roles that I have had since that time.

Have you heard any feedback on the commercial spot from your friends, family, colleagues, peers, other conductors, or MTT? If so, what have they said?

I have not yet heard from MTT, but am not too surprised by that. I think he and I are the same in the sense that we do not, and conductors do not, have so much time to watch TV. I saw the final draft of the commercial and also saw it on YouTube. I hope he will see it on the Internet when he has a moment and hearing from him then would be great. I have heard from so many people, friends, musicians and colleagues, from all over the United States who did see the commercial and their positive reaction to what they saw was pretty much unanimous. They felt that the commercial was very tastefully done and that it was wonderful publicity for me as an established conductor in many circles and a rising star in others. They felt that it would be very impactful for my career going forward.

What do you think the merging of these two worlds, in this commercial spot, says about the future of classical music?

I think the merging of these two worlds is great. I think for your typical person who might know more about cars than music, I would say the fact that such a strong comparison to the orchestral playing and automotive engineering, says that classical music is still very much relevant in so many facets of society and I think it inspires these persons to go to a concert and to investigate further the parallels between the joys and thrills of listening to music well-played, and driving a well engineered vehicle such as the Acadia. I think it is absolutely great.

What’s next for you? Are there any updates you can share?

I will be making my debut in China with the Wuhan Philharmonic in September and will be on the jury of the Eurovision Young Musicians (a biennial music competition for European musicians), which is broadcast in 17 countries in Europe. I will be doing a tour of Germany and Italy with the Nürnberg Symphoniker in the 2016-17 season and will also be making debuts in Turkey with the Bilkent Symphony Orchestra in Ankara. I will be making only one appearance in the United States in March, with the Detroit Symphony Orchestra. In Aachen, I will be conducting many concerts and will conduct three operas: Verdi's Macbeth, Puccini's Il Trittico and Strauss' Die schweigsame Frau. It will be an exciting year and I am very much looking forward to all it has in store for me.