NWS In The News: October 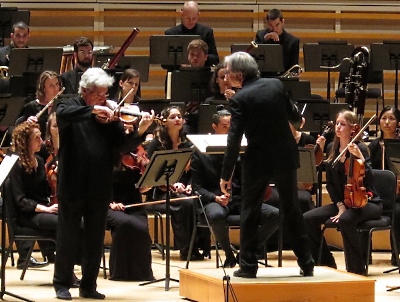 The beginning of New World Symphony's 2015-2016 season has merited press coverage of both the opening and subsequent concerts this month, as well as looking forward to the entire season.

Most recently, South Florida Classical review extolled the talents of NWS: "The ensemble has rarely sounded better than it did Saturday night at the Arsht Center, offering finely textured Beethoven and a sensational performance of a major American symphony under the baton of artistic director Michael Tilson Thomas."

SFCR has also praised other performances from this month:

In the Sun-Sentinel's SouthFlorida.com Guide to the Arts for 2015-2016, writer Ben Crandell lists his five critic's picks for the best of classical music for the upcoming season. New World gets three of the five. He includes this past Friday's "The American Sound," the December 5 concert ""Become Ocean: A Musical Palindrome," and April 16, 2016, when Seraphic Fire joins NWS for "Reich:The Desert Music."

Click here to read the article (note: click arrow at lower right of photo to proceed, then arrow at upper right to continue)

New World and its new sea­son are described in an in-depth inter­view with NWS Exec­u­tive Vice-President and Provost John Kieser, in a recent issue of Wire Magazine. “Another Hot Sea­son Of The Arts Is Here!” also fea­tures inter­views with rep­re­sen­ta­tives of some of the area’s other main cul­tural venues and insti­tu­tions - the Arsht Cen­ter for the Per­form­ing Arts, Broad­way Across Amer­ica, and Florida Grand Opera.

Click here to read the article (note: NWS is last among the interviewees)