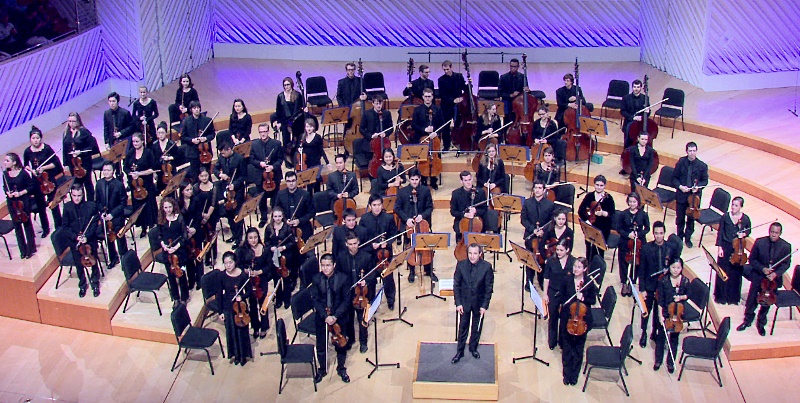 Among the top ten clas­si­cal per­for­mances of the year in South Florida, as judged by the writ­ers at South Florida Clas­si­cal Review, were three by the New World Symphony.

"At the New World Symphony’s final concert of the season..., Mutter, one of the music world’s most refined and deeply probing artists, made her first Miami appearance in two decades. Mutter’s spacious phrasing and impeccable technique drew out layers of emotion in Berg’s elegiac Violin Concerto. Her purity of tone enhanced the striking fragments of melody and color in Norbert Moret’s En réve with Michael Tilson Thomas and the orchestra richly supportive."

James Ehnes with James Conlon and the New World Symphony

"The prospect of another performance of the Mendelssohn Violin Concerto may not quicken the pulse of anyone who regularly attends concerts. Yet the violinist James Ehnes, who appears frequently on South Florida stages, showed what a great performance of this popular work could achieve. With a light, graceful style and unquestionable mastery of the notes, he brought a winsome vulnerability and a keen sense of drama to the performance, investing new life in one of the world’s most frequently played concert works."

"A concert that attempts to evoke the atmosphere of a Leipzig coffeehouse during Bach’s time might have seemed gimmicky had the music and the performances not been on such a high level. The early music specialist Jeannette Sorrell led members of the New World Symphony in performances of Bach, Handel and Vivaldi that sizzled with energy, leavened by the interpretive and historically informed intelligence she brought to the concert."

Posted in: Concerts, Guest Artists, In the News, MTT