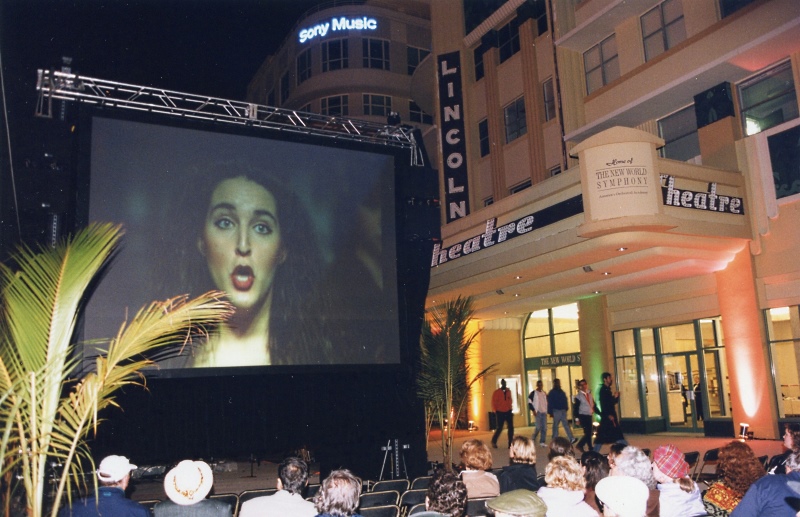 From the Miami Herald: “The New World Symphony and Michael Tilson Thomas will perform South Florida's first live closed-circuit concert telecast Saturday night on newly renovated Lincoln Road Mall. A 12-by-16-foot video screen will be positioned south of the Lincoln Theatre, between Pennsylvania and Washington Avenues, and the 8 p.m. concert, which is sold out, will be shown on the screen. Some theater-style seating will be available near the screen, though most listeners will likely be strollers and passersby.”

Newspaper ads for the concert in both English and Spanish described the exciting event:

Watch it live while it happens inside! See South Florida’s first ever closed-circuit concert telecast on January 13 at 8 p.m. in front of the Lincoln Theatre.

And if that weren’t enough for concert-goers and others on Lincoln Road that night, the performance was followed at 10 p.m. at the Euclid Oval by “Sôdade: A Brazilian Dance in the Old Style. In the spirit of Villa-Lobos’ day, Brazilian musicians perform choros from the turn of the century. Dust off the dances of the period: maxixe, tango brasileiro, lundu, and modinha.”

Two decades later, although via vastly improved technology, the public can still watch New World Symphony concerts broadcast from the concert hall to outdoors in SoundScape Park, just steps from Lincoln Road. But instead of a 12’x16’ screen - that’s 192 square feet - concert-goers watch on the soaring, 7,000-square-foot projection wall of the New World Center. And like twenty years ago, it’s still free.

The next Wallcast™ concert is on Saturday, January 30 at 7:30 p.m. - Zarathustra. But you can celebrate this anniversary tonight at SoundScape Cinema, presented by the City of Miami Beach and Citi®. At 8:00 p.m watch The Queen, starring Academy Award winner Helen Mirren.

Posted in: Events, From The Archives, New World Center